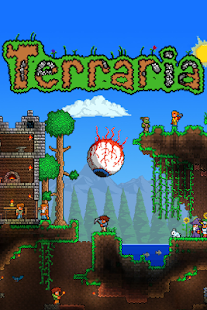 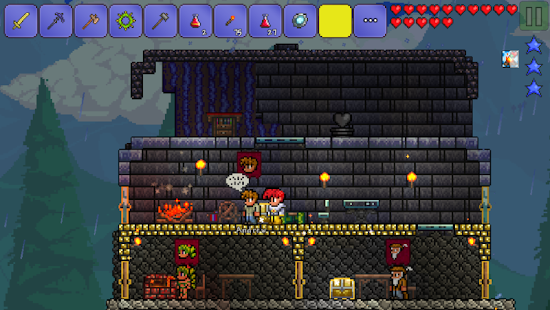 Terraria Action 2D game was taken from a PC and converted to smartphones. Something similar to Minecraft, but many gamers say that it is better and the comparison is generally weak.

Terraria has a completely different approach to formulas and storyline than Minecraft’s. Any world here has its own uniqueness, ranging from the islands flying in the sky, and ending with the depths of the Underworld. You will also have to fight with more than 20 bosses and dig a lot of tunnels.

A network game in Wi-Fi mode supports up to 4 players, you can fight against each other, or together. In the game there are more than 450 enemies and more than 100 types of blocks to build everything that comes to mind !!!

System requirements are quite tolerable for new models - Android 4.0.3, 512 MB RAM. (preferably 1 GB.). If the memory is less than 1 GB., Then the expanded worlds can slow down, and the possibility of creating them is impossible if it is less than 512 MB.

Terraria - a fascinating world of 2D Action with RPG elements, go for it, fight the bosses with your friends and become a winner !!!