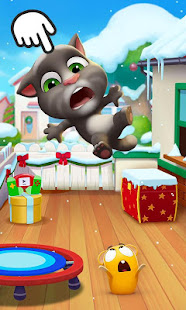 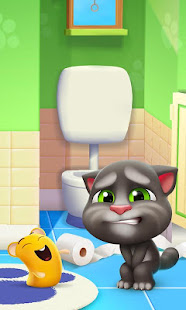 My Talking Volume 2 - a game for the Android operating system This game is in the Tamoychi genre and is distributed for free. It is an analogue of the game “Pou”, but unlike it, it is made in the 3D version. System requirements are minimal, except that it is worth saying that the version of Android should be from 4.1. In the game, the user needs to bail a small cat, which you need to take care of. Unlike the first part, a new food, furniture and mini-games appeared here. In addition, it is possible to take Tom in his arms, twist, drop, and even put on the toilet. The cat in the new part of the game has a plane, on it he can now move to new places, find there objects and decorations for the house. In the second part of the game there are pets. They appeared five pieces, but they are not immediately, they need to be found in the game. It is necessary to look so that the cat does not overdo it, otherwise it will start VAVKA. This is a disease of Tom, it can be expressed in the current snot from the nose, or in hiccups. In this case, the bathroom has a pharmacy cabinet. This game will be more interesting to young children. They will spend a lot of time participating with the cat in various adventures.
Download APK
Comments